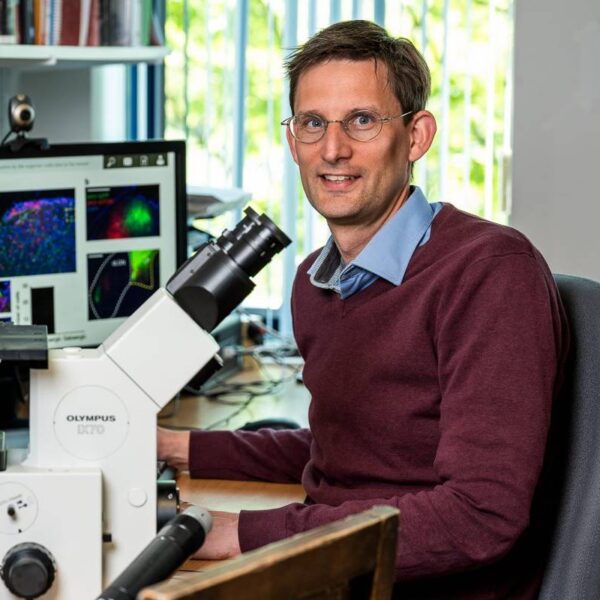 J. Alexander Heimel is an expert in the neurobiology of vision. His goal is to understand how vision is turned into action by instinct or learning. To find an answer to this question, he and his lab measure the responses of neurons in mice using a combination of techniques, such as electrophysiology and calcium imaging using two-photon microscopy and micro-endoscopy. They also selectively perturb visual processing by optogenetic, chemogenetic and pharmacological means to investigate the neural circuitry underlying vision. Brain areas that are actively being explored by Heimel and his team are the visual cortex and thalamus, the superior colliculus, the zona incerta and the periaqueductal gray.

Alexander Heimel was trained as a physicist and mathematician at Utrecht University. He obtained a PhD in Mathematics 2002 from King’s College in London (UK), under supervision of Ton Coolen. He then moved to the laboratory of Sacha Nelson (Brandeis University, Waltham, MA, USA) where has received training in experimental neuroscience. After his postdoctoral work in the USA, he returned to the Netherlands to the lab of Molecular Visual Plasticity headed by Christiaan Levelt, where he worked on plasticity in the visual cortex. In 2014, he founded the Cortical Structure & Function group at the Netherlands Institute of Neuroscience. Heimel has received a prestigious VIDI award from the Netherlands Organization for Scientific Research (NWO) and other national and international funding.

Among Heimel and coworkers’ discoveries are the surprising absence of organization of feature-preference in the visual cortex of very vision-oriented mammal, and the even more surprising presence of organization of feature-preference in the rodent superior colliculus. Other notable discoveries are the identification of the channel for the sign-inverting synapse in the rod bipolar cell in the retina, and that the elimination of inhibitory synapses is a major component in neural experience-dependent plasticity in the adult mammal. Heimel and his team also showed how the innate fear of mice to birds in the sky habituate.

To all researchers To the Heimel Group