The Netherlands Institute for Neurosciences accommodates the Sleep Lab, the place where Eus van Someren (head of the Sleep and Cognition group) and his team study insomnia. “This is one of very few places where insomnia is researched so extensively and in such depth, by means of combining various cutting-edge methods.”

Is it unusual to study insomnia? Yes and no. No, because poor sleepers are a worldwide subject of clinical study. “But those studies tend to focus on sleepers who are thought to suffer from a sleeping disorder, such as sleep apnea or narcolepsy,” explains Van Someren. Yes, because the Sleep Lab is the only lab that carries out research into the most common sleeping disorder: “ordinary” poor sleep.

Some 10 percent of the population suffer from poor sleep. Insomnia as such is not deemed an official disease, although it is included in the DSM-5, the handbook for the classification of psychiatric disorders. Dutch health insurers do not cover treatment of insomnia, even though poor sleep may have very negative effects on an individual’s health, such as tiredness, exhaustion, depression, stress, cardiovascular disorders and obesity.

In the Sleep Lab, the Van Someren team carries out 24-hour measurements for one 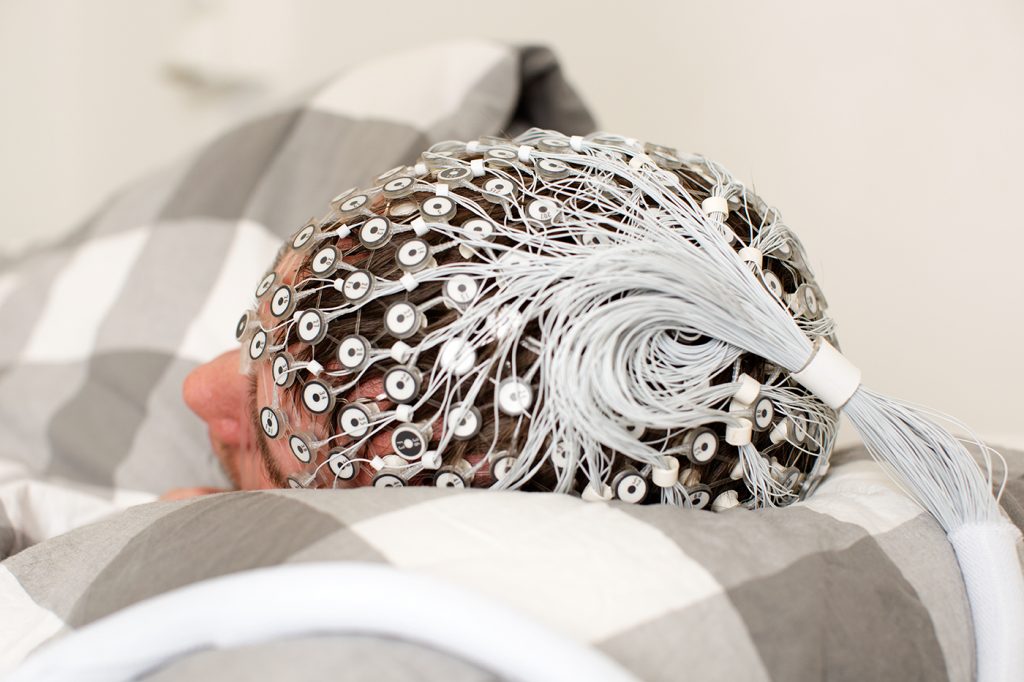 week every month on eight individuals who spend two nights at the lab. Van Someren: “We make brain scans in the morning or evening. Sometimes we also do transcranial magnetic stimulation (TMS). They sleep wearing an ‘electrode-cap’, which has 256 electrodes. Clinical examinations use 2 to 6 electrodes, and hardly ever yield a find. Because we measure 256 channels, we get a better image of where in the brain the deviating signal – if there is one – originates, and how the various parts of the brain communicate with each other during sleep.”

The Sleep Lab sleepers, selected from volunteers who participate in the sleep registry, are asked to keep a sleep diary in the week prior to the study and to wear a device on their wrist that registers their sleeping pattern. “We usually also have an extensive profile of these people. We know their personal characteristics, important events from their lives and their medical history.”

On the basis of data from the sleep registry, Van Someren is now able to distinguish four types of insomniacs. “We would now also like to study them in the lab.” Such as people with ‘paradoxical insomnia’, who claim they lie awake three to four nights a week, but whose clinical measurements indicate they sleep a solid six hours every night. “With the help of our sleep-EEG we want to take a closer look to see if perhaps there is something wrong with the connections between certain brain areas in these people. The combination of EEG, MRI and TMS measurements may provide an insight into the disrupted brain systems that give rise to sleep complaints.”