Karl Deisseroth, Professor of Bioengineering and of Psychiatry and Behavioral Sciences at Stanford University, was awarded for the Ariëns Kappers medal. He was presented with the medal by Pieter Roelfsema, director of the Netherlands Institute for Neuroscience. 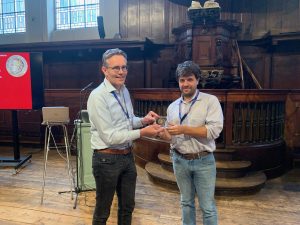 Deisseroth was awarded for the medal because of his exceptional contribution to the field of neuroscience, in particular his role in developing the tools of optogenetics and clarity, which have revolutionized the field in all its disciplines and areas of research. Moreover, using these tools he himself advanced our insights in the circuitries in the limbic system that underlie our most basic emotions, such as hunger, thirst, love, mood, anger and affection.

Ariëns Kappers focused his research on comparative neuro-anatomy and was well known for his travels all over the world to collect his samples. His best known publication is “Die vergleichende Anatomie des Nervensystems der Wirbeltiere und des Menschen“, published in English in 1936 as “The Comparative Anatomy of the Nervous System of Vertebrates Including Man”.